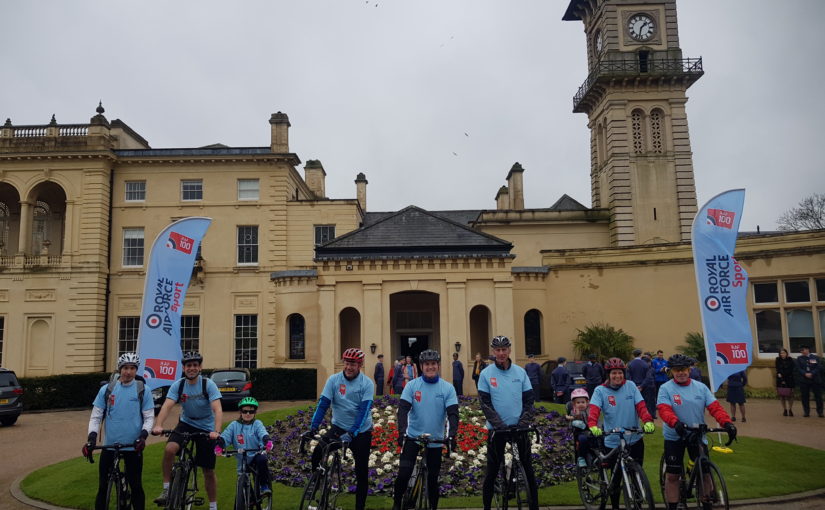 The RAF 100 Baton Relay team were welcomed to Bentley Priory Museum on 2 April by the Mayor of Harrow, MP Bob Blackman and a cheering crowd of over 200 Museum visitors. Arriving by bicycle, the baton team had cycled from the RAF Museum in Hendon on the second day of their 100 day baton relay to significant RAF related sites across the country. The baton was received by Museum volunteer, John Tracey, on behalf of the team of volunteers who keep the Museum running.

Bentley Priory Museum was the baton’s only stop in Harrow, acknowledging the important role of RAF Bentley Priory, particularly during the Battle of Britain in 1940.

Museum Director, Eleanor Pulfer-Sharma: “We are proud to be able to tell some of the Royal Air Force’s important history within our Museum and were delighted to welcome the RAF 100 baton team to the Museum as part of the national celebrations of the RAF’s centenary. The RAF 100 baton’s visit to the Museum launched the Museum’s own centenary celebrations, which include a temporary exhibition on the RAF’s technical innovation & a new concert ‘Flying without Feathers’ by Tonic Choir in April & May.”

After leaving Bentley Priory Museum, the baton team visited the Battle of Britain Bunker in Uxbridge. 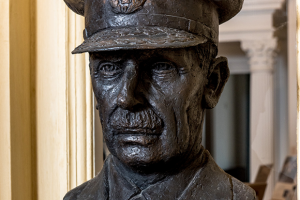 Bentley Priory Museum are thrilled to have secured a £48,000 grant from the Heritage Lottery Fund (HLF) for a World War I project, which will explore the WWI experiences of Royal Flying Corps pilot Hugh Dowding, and how his experiences shaped his convictions and leadership as Commander-in-Chief of Fighter Command during the Battle of Britain in 1940 – based at RAF Bentley Priory, Stanmore.

Without Dowding’s leadership during the Battle of Britain, the outcome for Britain could have been very different, with Nazi invasion of Britain highly probable.

The project will be delivered in 2017, 100 years after Dowding returned from flying at the Western Front to Britain, to support the training of pilots who were being sent to the Western Front.  Due to his first hand aerial experience over the trenches, Dowding campaigned for critical improvements in pilot training and well-being during both WWI – and later during WWII.

Director, Eleanor Pulfer-Sharma: ‘Dowding’s technological vision and leadership during the Battle of Britain made him one of Britain’s most important historical figures. The Heritage Lottery Fund’s grant will be invaluable to improving historical understanding of how World War I impacted Dowding and the connections between World War I and World War II – which are often explored in isolation.’’

The project will make this important heritage accessible through a temporary exhibition, WWI resources for Schools, and family activities during the summer and October school holidays.