How to Find Us

Use postcode HA7 3HT for Sat Navs. This will bring you to the gates of Bentley Priory Estate, where a friendly concierge team will open the gates for you on your arrival.

There is plenty of free car-parking on site. The car-park is a 2 minute walk from the Museum’s entrance.

Full directions for getting to Bentley Priory by public transport here.

How to Find Us

Use postcode HA7 3HT for Sat Navs. This will bring you to the gates of Bentley Priory Estate, where a friendly concierge team will open the gates for you on your arrival.

There is plenty of free car-parking on site. The car-park is a 2 minute walk from the Museum’s entrance.

Full directions for getting to Bentley Priory by public transport here. 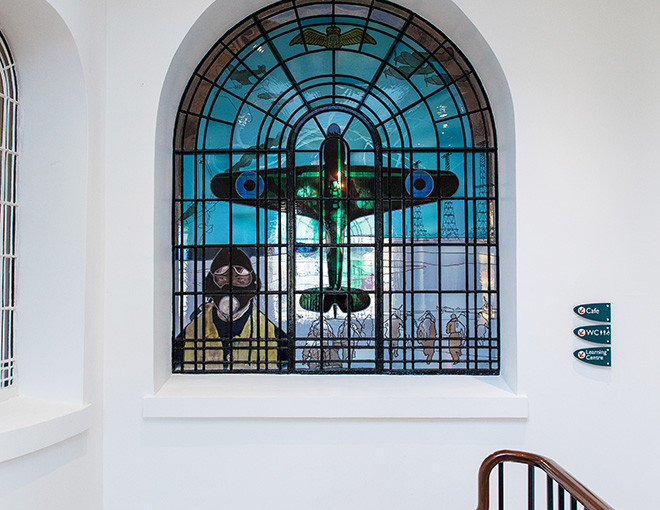 The Museum was formally opened by TRH The Prince of Wales – Patron of the Bentley Priory Battle of Britain Trust – and The Duchess of Cornwall on 12 September 2013.

The opening of the Museum brought together veterans who flew in the Battle of Britain alongside veteran Fighter Controllers, who were wartime members of the Women’s Auxiliary Air Force (WAAF).  Their Royal Highnesses met the lady veterans in the newly recreated ‘Filter Room’ in the Museum, a recreation of the wartime room at Bentley Priory, where 3 of the ladies came face to face with models of their wartime selves.

Patricia Clark, a filterer during the Battle of Britain, said: “’It is really exciting to see Bentley Priory so wonderfully restored after all these years.  We, the few remaining veterans, now in our nineties, still have vivid memories of carrying out the vital work of the secret Dowding System during the Battle of Britain.  It is rewarding for us to know that this this wonderful Museum is ready to tell future generations the full story behind the victory that saved the free world.”

Wing Commander Bob Foster DFC AE, Chairman of the Battle of Britain Fighter Association, said: “Along with my fellow veterans, I felt it was so important to preserve Bentley Priory because of its enormous symbolic and strategic significance.  To see it so beautifully restored as a Museum that tells the story of Dowding and the role of Bentley Priory, as well as of the Battle of Britain aircrew and the huge network that supported us, is fantastic.  Today is a day of celebration and I know the Museum has a fine future ahead of it.”

Air Chief Marshal Sir Brian Burridge, Chair of the Trustees reflected: “Today marks the culmination of eight long years of hard work.  But we have created an exciting and highly relevant museum and learning centre which will serve as a symbol of the huge significance of the Battle of Britain and of the determination and sacrifice of those involved. Many people and organisations have been generous supporters but fund-raising needs to continue to close the final gap of a quarter of a million pounds.  Throughout the project to save this iconic building – and to quote Churchill – ‘the odds were great; our margins small; the stakes infinite.’”

The Trust worked in conjunction with the UK’s leading heritage-led regeneration specialists, The Prince’s Regeneration Trust (PRT) to forge a ground-breaking partnership with the developers of the site.

On Saturday 8 September 2012, the Bentley Priory Battle of Britain Trust welcomed 150 veterans, volunteers and stake holders to the handing over ceremony of the museum to the Trust from Barratt Developments and City and Country Group, following £6 million of renovations.

Sixteen wartime WAAF, former members of the ‘Beauty Chorus’, were welcomed back to Bentley Priory. These amazing ladies are members of the Association of RAF Fighter Controllers, who have sponsored the new ‘Dowding System’ stained glass window. The window highlights the importance of the Dowding System in victory in the Battle of Britain and particularly the important role WAAFs played in identifying and intercepting incoming Luftwaffe bomber raids.

On Friday 15th June 2012 His Royal Highness Prince Charles and HRH The Duchess of Cornwall  joined veteran air crew from the Battle of Britain at Bentley Priory.

More than 20 veterans talked about their experiences to Prince Charles and his wife Camilla over tea as part of the BBFA’s annual summer gathering. Guests were then treated to a spectacular Spitfire and Hurricane flypast from the RAF Coningsby-based Battle of Britain Memorial Flight.

TRHs chat with Air Commodore (ret) Pete Brothers, chairman of the BBFA. After commanding 32 and 257 Sqns during the Battle of Britain, he and his friend Douglas  Bader took part in the Victory flypast over at the end of the war.

Prince Charles chats over tea to veterans. Sgt Tony Pickering, on the left, explains how he was presumed German when he baled out over Surrey!

The renovation of Bentley Priory started in 2010. City and Country Residential transformed the Mansion House in less than 2 years, restoring the historic rooms in the Museum and creating residential apartments on the First Floor.

HRH The Prince of Wales graciously accepted the Bentley Priory Battle of Britain Trust’s invitation to become Patron of the Trust’s appeal to raise £1.8M to fit out the museum within the historic rooms of Bentley Priory.

The Bentley Priory Battle of Britain Trust raised over £1.2 million for the creation of engaging and accessible exhibitions at Bentley Priory Museum.

The money was raised through grants, donors and fundraising events at Bentley Priory,  including a successful partnership event with St Luke’s Hospice which raised over £18, 000, and Heritage Open Days, which attracted over 5000 visitors in 2009.  Vital funding was secured from the Heritage Lottery Fund, to create the exhibitions within the Museum.

The Museum continues to fundraise, to enhance the interpretation in the exhibition galleries and learning centre.

If you are interested in supporting the Museum, please see more information on Donations & Sponsorship.

On 23 July 2008, the Planning Committee of the London Borough of Harrow granted planning consent for the scheme submitted by VSM Estates, for the Museum and 8 residential units in the Priory building and a total of 103 residential units on the whole site.

The planning application includes a requirement for the developer to refurbish the Museum spaces, and to provide support towards the long-term ongoing costs of running the museum, dedicated to the history of Bentley Priory.

The museum will educate future generations about the unique heritage and significance of Bentley Priory to the nation and allow its historic rooms to be open to the public for the first time in 80 years.  It will also pay respect to the bravery and sacrifice of RAF pilots and ground staff who helped turn the tide against Nazi Germany during World War Two.

Air Chief Marshal Sir Brian Burridge, Chairman of the Bentley Priory Battle of Britain Trust, said:“This represents the culmination of five year’s hard work to ensure that the Priory and all that it stands for in our history has a sustainable future as a museum and centre for education about the people, technology and leadership that bought us victory in the Battle of Britain, arguably the most pivotal battle of World War II.  There is now much work to do in fundraising and Churchill would have recognised that for the Trust, ‘this is not the beginning of the end, merely the end of the beginning’.”

The RAF officially left Bentley Priory on 30 May 2008, with many of the administrative offices being moved to RAF Northolt.

Creation of the Bentley Priory Battle of Britain Trust, 2006