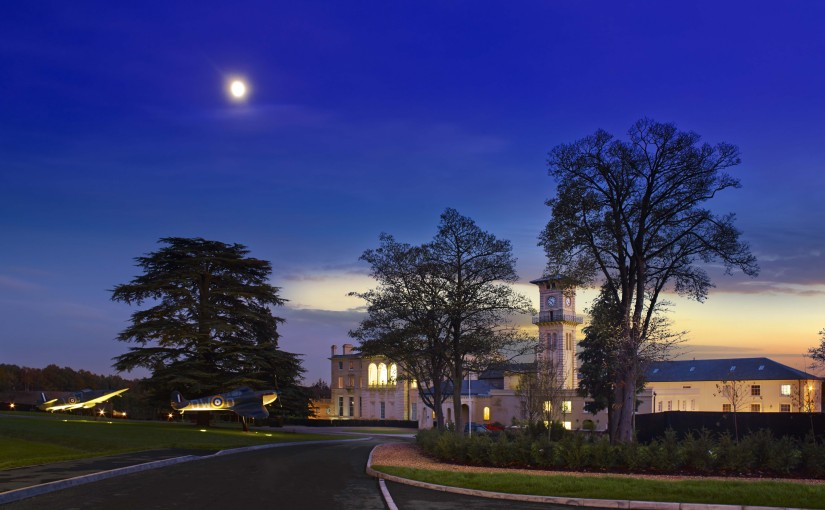 Bentley Priory and The Battle of Britain, 1940

Bentley Priory is best known for its pivotal role as Headquarters Fighter Command during the Battle of Britain in 1940.

Before the Air Ministry bought Bentley Priory in 1926, it had been a private home, hotel and girls’ school.

The name Bentley is believed to mean land artificially cleared of coarse grass for pasture or cultivation.

Bentley Priory was once a Priory, home to a cell of Augustinian Friars. It is believed that the Priory was founded in 1170 by Ranulf de Glanville, who became Chief Justiciary of England.

During the dissolution of the monasteries in the 1500s, Bentley Priory ceased to be a priory and the land changed hands on numerous occasions, including brief ownership by King Henry VIII.

In 1766 the estate was sold to James Duberly. Duberly pulled down the original Priory and built the first part of the present Bentley Priory, on the highest point on the ridge some distance from the original site.

Bentley Priory and The Marquess of Abercorn

In 1788, Bentley Priory was sold to John James Hamilton, the 9th Earl of Abercorn, who became the 1st Marquess of Abercorn in 1789.

The Marquess of Abercorn was one of the only men to hold peerage titles in England, Scotland and Ireland. During his ownership, Bentley Priory was a social and political hub. Visitors included politicians Pitt, Canning and Lord Liverpool and poets Wordsworth and Sir Walter Scott.

In 1788, The Marquess of Abercorn commissioned architect Sir John Soane  to extend and refurbish Bentley Priory in ‘a more lavish and sumptous manner’.  Best known for his design of the Bank of England, Sir John Soane specialised in neo-classical architecture and clever designs which encouraged natural light into rooms and buildings. Soane’s additions to Bentley Priory include the stained glass windows in the Entrance Hall and the spectacular Rotunda.

Bentley Priory as a Royal Residence

After Queen Adelaide’s death, the estate was sold to Sir John Kelk, noted civil & railway engineer. He added a picture gallery, conservatories, the clocktower and commisioned the creation of the Italian Gardens, which have been restored and are accessible to Museum visitors.

The estate was sold in 1882 to Frederick Gordon, of Gordon Hotels, who converted Bentley Priory into a hotel. Despite spending £48,000 to extend the Railway Line from Harrow to Stanmore to attract guests, the hotel was not a success.

Bentley Priory and the RAF

In 1926, the Priory estate was split up and one lot comprising of the Priory itself and around 40 acres was sold to the Air Ministry, for a sum believed to be £25,000. In May 1926, Inland Area (Training Command), part of the Air Defence of Great Britain (ADGB) moved into the Priory. As the RAF grew in size, the ADGB was dissolved and Bomber, Coastal, Fighter and Training Commands were created.

Fighter Command amalgamated with Bomber Command in 1968, to form Strike Command and Bentley Priory became an administrative and training unit.

The RAF were Bentley Priory’s longest serving residents, occupying the Mansion House and grounds until they departed in 2008.

Bentley Priory Museum opened in 2013, after 8 years of planning and fundraising.